I have, for the most part, an addictive personality. If there's something I'm into, I become addicted to it.... basically.  And I've lost count of all the things I've become addicted to over the years. Chocolate, stealing, stickers, medal games...

Fanbooks are no different. It was really bad a couple of years ago, when I would go to events, buy anything that caught my fancy, then stack it somewhere and forget all about it. I know I don't have to largest collection, no more than 500, I'm sure, but they're collecting dust, and I really shouldn't buy another book until I go through the ones I have already.

Especially since I've found a couple of duplicates in my collection. Fuck.

I mostly have Harry Potter, Gintama, and Hetalia books, but I do have few oddballs here. Let's check them out before I chuck/sell them.

A cover this moe was bound to catch my eye. It's mostly 16 pages of four-panel comics. Half of them are about Mr. Bennet fanboying over trying to protect his daughter Claire. The others are gag bits involving Mohinder the lizard, with a couple about Hiro and Ando.

It a cute book that looks and feels a bit on the cheap side.  Let's move on.

I started watching xxxHoLic a bit too late to get much in the way of fanbook action, I think. By the time I started looking for books at events, the series was already losing ground. I did find a few, particularly from this circle, and while I must have sold the other ones last year, I kept this one.

The two stories in this take place in the alternative universe story, Private High School Horitsuba, in which the characters of Tsubasa: Reservoir Chronicles and xxxHoLic go to high school together. In the first one, Watanuki overhears a group of girls wondering if it would be nice seeing Doumeki smile. He and Doumeki have sex, and then the next day, Doumeki hears the same girls wondering if a crying Watanuki would be as cute as a smiling Watanuki.

The second story is about Wakanuki and Syaoran. (I'm pretty sure this is the original, because it is Syaoran who, in the Horitsuba drama CDs, is in love with Sakura.) Syaoran cuts his finger, and after Watanuki bandages him up. nearly declares his feelings for Watanuki. He's interrrupted by a text on Watanuki's phone, which was sent by Doumeki... who was watching this whole time? DUN DUN DUUUUUN.

The next morning, Syaoran spots a love bite on Watanuki's neck, so this story ends on a sad note.

I need something to cheer me up. 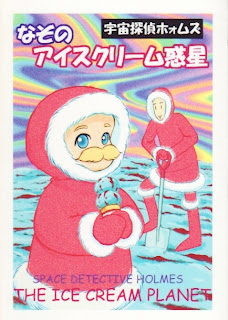 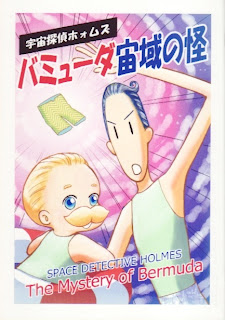 ! (Excuse me while I giggle madly for a minute.)

How could I NOT buy this? I didn't get around to reading any of the Sherlock Holmes stories until months after seeing the 2009 movie, but even I know Watson is not that adorable.

The circle knows how silly this reimagining of the good doctor is, too. They released a book during the anniversary about Sir Arthur Conan Doyle checking up on his creations. All I remember from skimming through it was Conan Doyle's confusion and shock after meeting the moe-tastic Watson. (Should have bought that one, too...)

The two books are about the goofy adventures the pair get into. And while The Ice Cream Planet is pretty funny, The Bermuda Mystery packs more visual gags. For example, the man in charge of the Bermuda Chamber of Commerce looks a bit familiar...

And then there's the image of pipecleaner-thin Holmes dressed in a sunflower bikini... The series really is something else.

For next time, I figured that I should go from the smaller collections up, so I'll look at the only three Ace Attorney books I own. Expect a lot of Phoenix Wright in a loincloth.
Posted by Ileana A. at 5:24 AM